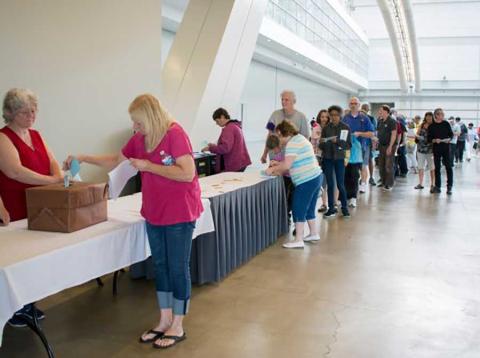 Pittsburgh-area Giant Eagle associates represented by United Food & Commercial Workers (UFCW) Local 1776 Keystone State (KS) “overwhelmingly” voted in favor of a new three-year contract that boosts wages and benefits for about 5,500 employees of the supermarket chain at 35 corporate-owned stores in western Pennsylvania and West Virginia, according to the union.

Among the new contract’s features:

Negotiations between Pittsburgh-based Giant Eagle and Local 1776 KS started in May and wrapped up with a deal in last month.

“Through months of negotiations, our committee remained steadfast and ensured all key issues were addressed,” said UFCW Local 1776 KS President Wendell Young IV. “Contract negotiations can be tough, but both sides here were able to reach across the table and shake hands on a fair contract that, for our members, ensures strong wages and great benefits, while working with the company to provide the best customer service possible. This is a very good result for our members, customers and the company.”

“We are pleased with this contract and the overall energy from both sides of the table,” added Tony Helfer, UFCW Local 1776 KS’ western division director. “We have reached an agreement that will greatly benefit all current and future Giant Eagle members. This is a solid contract, and the members have spoken volumes with their votes.”

“We have greatly appreciated the collaborative spirit that the Local 1776 Keystone State leadership team brought to the bargaining table,” noted Giant Eagle Special Counsel Dan Shapira. “The ratification of the agreement by the team members it directly impacts is both exciting and gratifying, and it helps ensure that our customers receive the highest-quality service.”

Giant Eagle operates more than 400 locations in Pennsylvania, Ohio, West Virginia, Indiana, and Maryland. The grocer is No. 16 on Progressive Grocer’s 2018 Super 50 list of the top grocers in the United States.