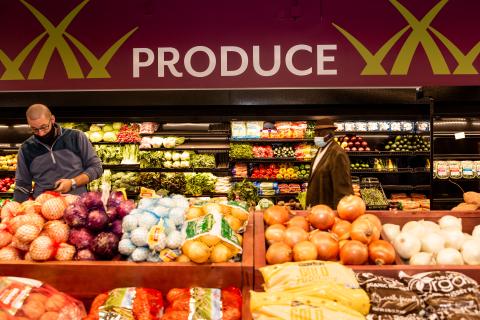 An emphasis on fresh produce is a key differentiator for Gem City Market.

No one quite knows how Dayton, Ohio, came to be known as “the gem city,” but a recently opened food retailing cooperative near the city’s downtown is lending credence to the name.

Following a six-year process, Gem City Market opened in May to serve a neighborhood lacking convenient access to fresh, affordable food and other amenities commonly found in stores located in more affluent areas. Gem City Market offers fresh categories, such as produce and case-ready meats, a full-service deli, a community room, and a teaching kitchen with six residential style cooktops and stoves. The store also features a health clinic with two exam rooms and a small coffee shop operating in a leased space near the entrance.

“It all kind of works together,” says Lela Klein, co-executive director of Co-op Dayton, and a Gem City Market board member. “We knew we needed to be more than just a store, so we are trying to do a lot. We have a really strong focus on fresh produce, because there’s not another grocery store within 3 miles of us that has a produce department to speak of. So that is one of our differentiators.”

Gem City Market managed to squeeze all of its features into a 15,800-square-foot store, with a sales floor of 8,200 square feet, at the intersection of Salem and Superior avenues, just across the Miami River from downtown Dayton. The location has special meaning for Klein, because it’s only about three blocks from where she grew up.

“My role with Gem City Market has been in partnership development financing and the community-organizing side of things,” explains Klein, a graduate of Harvard Law School with a background as a labor and employment attorney. “The store was six years in the making, and there were thousands of people involved. The collaboration with AWG [Associated Wholesale Grocers], which is also a cooperative, was really crucial.”

AWG and a local architect collaborated on the store design and merchandising layout in a building owned by a 501(c)(3) nonprofit, according to Klein. Additional advice was provided by Columinate, a Madison, Wis.-based national consulting cooperative focused on supporting mission-driven organizations. To keep occupancy costs low, Gem City Market obtained donated equipment and interest-free financing through tax credits. The store is owned by 4,300 people, most of whom made a donation of $100 or more. 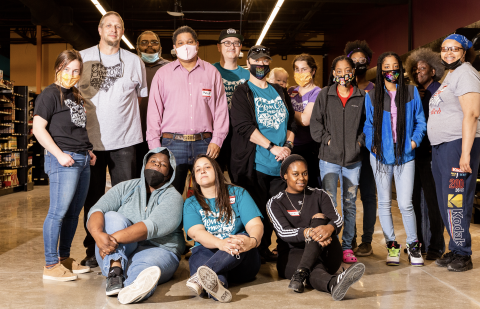 Gem City Market store manager Leah BahanHarris oversees a staff of 30 employees, some of whom are shown here.

An outpouring of community support made Gem City Market a reality, but now the store needs to operate efficiently and generate financial returns to remain viable. The task of day-to-day operations falls to Leah Bahan-Harris, who has the role of store manager. She oversees a staff of 30 employees, half of whom are full-time and receive an hourly wage of $14.75. Roughly 80% of the employees are local, and half live so close to the store they can walk to work, according to Bahan-Harris. Gem City Market’s labor model is supplemented by volunteers who perform various duties around the store because they want to make a difference and see the store fulfill its vision of community impact, she adds. The store targets a profit margin rate of 1.8% to 3% by operating as a small-format full-service grocer catering to an underserved customer base.

Like Klein, Bahan-Harris spent much of her childhood near Gem City Market’s location: She grew up in the Five Oaks neighborhood of Dayton before moving to the Trotwood community northwest of Dayton, an area now exploring the co-op model.

“There is a group of neighbors in the Trotwood community that is already coming together and talking about could they do the same thing we are doing, and we’ve also had calls from around the country,” says Klein. “A lot of people are watching to see how it works.”

Klein is also working with groups in Louisville, Ky.; Rochester, N.Y.; and Baltimore.

“The cooperative spirit is really strong,” notes Klein. “We would like to help support other food-related social enterprises in Dayton, and we would love to think about expansion, but it will really be up to our community.”

Gem City Market may be a co-op, but that doesn’t mean the store is lacking top-of-the-line technology, thanks to the generous support of leading industry suppliers. For example, Bridgeton, Mo.-based Hussmann Corp., a Panasonic company, partnered with Emerson and The Chemours Co. to create an innovative and sustainable refrigeration solution.

“This effort went beyond the typical supplier-manufacturer-end customer transaction,” explains

Andres Lacassie, Hussman’s VP of core and distributed cases. “We were able to bring together engineers, designers, community leaders and several others to outline the needs and design a truly innovative solution that will have a positive impact.”

That impact involves using equipment with all of the functionality a modern grocer would expect from its refrigeration systems, with a lower overall carbon footprint. To do so, Hussmann assembled the overall refrigeration system, which is made of assembly components, 10 low- temperature booster systems from St. Louis-based Emerson, and a low global-warming-potential (GWP) refrigerant from Wilmington, Del.-based Chemours branded Opteon XP10. As part of the donation to Gem City Market, Hussmann also included its medium-temperature Protocol systems, refrigeration units and display cases with CoreLink micro-channel condensers and unit coolers.

“Any time you can work together with some of the top companies in the industry to solve needs on multiple fronts, the results can be amazing,” says Buzz Schaeffer, Hussman’s principal engineer. “We created an environmentally friendly refrigeration solution for a store that will serve an area that needs an outlet, with options that were not previously available.”