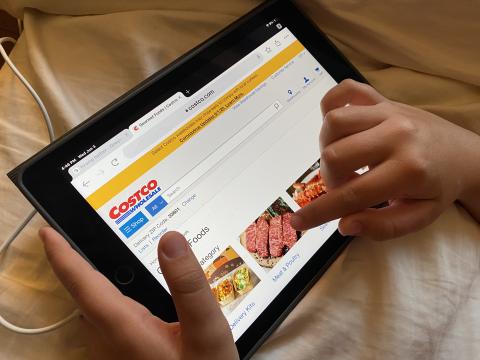 Costco also reported an impressive 66.1% jump in e-commerce sales for the third quarter.

Online shoppers continued to flood Costco's website in May, prompting the warehouse giant to set another e-commerce sales record.

Costco Wholesale announced Wednesday that its e-commerce comparable sales (excluding the impacts of fuel and foreign currency fluctuations) were up a record-setting 108.1% for the four weeks ended May 31. The impressive metrics come a week after the retailer reported a 66.1% jump in e-commerce sales for the third quarter.

Costco has always had a reputation for a quality assortment that attracts customers to its stores in droves, but historically its e-commerce sales have been lackluster. The Adobe Digital Economy Index reported domestic e-commerce sales up 49% in April from March, while online grocery saw an even bigger boom, jumping 110% from March to April. These pandemic-panicked consumers shopping at home have given Costco an opportunity to take its online grocery game to the next level, and shoppers are obviously loving it.

Physical same-store sales excluding the impacts from change in gasoline prices and foreign exchange were 9.2% in May.

During a third quarter earnings call with analysts, Costco CFO Jack Galanti said the company would be bringing back sampling in-store after suspending it in March.

“We're going to start doing some things in mid-June on a slow rollout basis in sampling,” Galanti said. “I can't tell you anymore, but needless to say it’s not going to be where you go and just pick up an open sample with your fingers."

Costco said its fresh food gross margin percentage was up during the quarter. "Just looking at fresh foods and the food items of what we call food and sundries, it's it's been way up, particularly in fresh foods and somewhat and the rest," Galanti said.

Issaquah, Wash.-based Costco operates 787 warehouses worldwide, including 543 in the United States and Puerto Rico. The company, which is No. 5 on Progressive Grocer’s 2020 PG 100 list of the top food retailers in North America, also has e-commerce sites in the United States, Canada, the United Kingdom, Mexico, Korea and Taiwan.