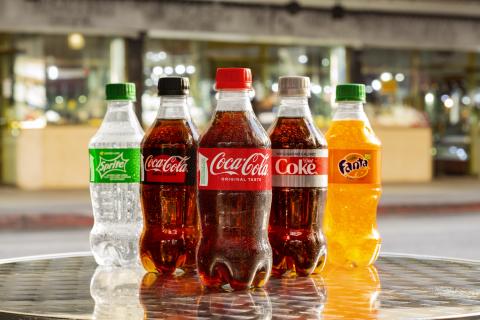 The company plans to launch a 13.2-ounce bottle made from 100% recycled plastic material.

The Coca-Cola Co. is making good by its "World Without Waste" initiative with the introduction of a new bottle size for the first time in a decade.

The company plans to launch a 13.2-ounce bottle made from 100% recycled plastic material (rPET). The new bottle will be available first in the company’s biggest and most iconic brand: Coca-Cola. In addition, the company plans to transition to bottles made from 100% recycled plastic material across a selection of brands in the portfolio, including DASANI and smartwater, which will be available in various package sizes this year.

“Given our scale and resources, we realize our unique opportunity and clear responsibility to make a positive difference in the global plastic crisis, bringing us closer to our ambitious World Without Waste goals,” said Alpa Sutaria, VP and general manager, sustainability, North America Operating Unit, The Coca-Cola Co. “Plastic is a valuable packaging resource and these innovations in the U.S. represent meaningful action that focus not just on what goes into the bottles, but on innovation of the bottles themselves.”

As part of a portfolio approach, 20-ounce bottles made from 100% rPET are being introduced across Coca-Cola, Coke Zero Sugar, Diet Coke and Coca-Cola Flavors beginning this month in California and New York and will continue to roll out this spring in Texas. DASANI and smartwater will follow suit, introducing 20-ounce bottles made from 100% rPET in March and July, respectively. Finally, in February, people in select markets will see a new 13.2-ounce clear bottle from Sprite, also made from 100% rPET. The clear package makes it easier for bottles to be recycled and remade into new bottles. All Sprite packaging will transition to clear packaging by the end of 2022.

In 2018, Coca-Cola pledged robust World Without Waste goals to collect and recycle the equivalent of a bottle or can for every one the company sells by 2030, to make 100% of packaging recyclable by 2025 and to use 50% recycled material in bottles and cans by 2030. By introducing 100% rPET bottles in the United States, this marks a total of 19 markets globally offering recycled packaging.

Coca-Cola also said it aims to inspire consumers to join in reducing waste, with the largest on-package messaging effort by the company to-date. Each 100% rPET package will feature on cap messaging, as well as a “Recycle Me Again” message on the label to encourage people to take action and recycle their bottles so that they can be remade into new ones, supporting closed-loop recycling systems and circular economies.

On Wednesday Coca-Cola reported quarterly declines in both profit and revenue in the compared with a year earlier. For the fourth quarter net income was $1.46 billion, down from $2.04 billion in the year-ago period. Adjusted earnings per share rose to 47 cents from 44 cents. Revenue fell 5% to $8.61 billion. The company also disclosed that it faces a potential $12 billion tax liability from a dispute with the Internal Revenue Service.