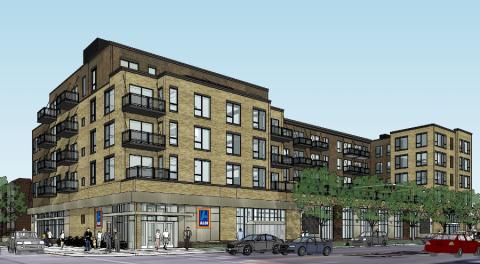 Artist rendering of the planned Rex 26 Aldi location in Minneapolis

Discount retailer Aldi has confirmed that it will open a new Minneapolis location next spring in a mixed-use building called Rex 26 at the corner of Lyndale Avenue and 26th Street.

The 21,000-sq.-ft. store is larger than its other Minneapolis counterparts and will offer a few unique features that include underground parking and shopping baskets for customers’ use.

Aldi currently operates 58 stores in Minnesota, with plans to open additional locations in Eagan, Princeton, Virginia and Marshall this year. In addition to the larger Minneapolis store, the hard-discount grocer is planning to open locations in Cloquet, Chaska, Chanhassen and Lakeville, along with two more in St. Paul, in 2019. It expects to operate more than 70 stores in the state by the end of that year.

As part of last year’s announced $5 billion expansion and remodeling plan, Aldi will remodel 35 Minnesota stores by the end of 2020 at a cost of $34 million, according to a StarTribune report. So far, the company has completed 10 store remodels, with another seven to be completed by the end of this year.