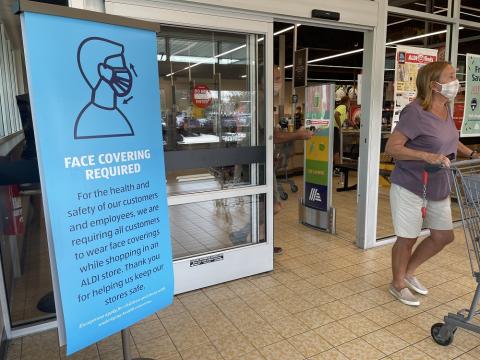 The company will add curbside grocery pickup service to 500 additional stores by the end of year, bringing the total number of curbside locations to more than 1,200.

Aldi is heading into the second quarter of 2021 with plans to open 100 new stores, expand grocery pickup, and break ground on a new distribution center as the company looks to capitalize on pandemic-led growth.

The retailer announced today that it will open approximately 100 new locations nationwide in 2021, with a focus on Arizona, California, Florida and the Northeast.

The company also said it will add curbside grocery pickup service to 500 additional stores by the end of the year, bringing the total number of curbside locations to more than 1,200. Aldi will also continue to offer grocery delivery via Instacart in almost all of its stores.

Additionally, Aldi breaks ground today on a new regional headquarters and distribution center in Loxley, Alabama, which the company said will support expansion throughout the Gulf Coast region. The 564,000-square-foot facility is the company's sixth distribution center in the southern U.S., and it will be equipped to service up to 100 stores in Alabama, Southern Georgia, Mississippi, the Florida Panhandle and Louisiana, which will be the 38th state where Aldi operates.

The new Loxley distribution center will feature several sustainable building elements, such as solar panels, LED lighting and an environmentally friendly refrigeration system. The facility will also create an additional 200 jobs when it opens next year. With the distribution center in place, Aldi plans to open as many as 35 new Gulf Coast-area stores by the end of 2022, with the first two stores in Tallahassee, Florida slated to open later this year.

"We're incredibly proud to continue growing in all aspects of our business, from opening new stores to enhancing our e-commerce offerings, especially in light of the challenges businesses have faced in the last year," said Jason Hart, CEO, ALDI U.S. "Our commitment to our shoppers, new and existing, is the same — we will do everything in our power to offer the lowest possible prices every day — and we look forward to supporting more communities across the country with amazing Aldi products at a value that can't be matched."

With the planned addition of 100 stores by year’s end, Aldi will have added 723 stores during the past five years.

While the opening of Aldi’s 2,000th store was a notable accomplishment in July, it was also a milestone that the company had expected to achieve 18 months earlier. The 2,000-location goal had been set in Dec. 2013, when Aldi had just 1,269 stores and disclosed plans to open 650 new locations by the end of 2018.

By mid-2017, when it was trending well short of its goal, the company increased its store count goal to 2,500 units and extended the timeline to achieve it to the end of 2022. It now appears that Aldi is also unlikely to achieve this revised goal, barring a dramatic acceleration of store expansion in 2021 and 2022. However, Aldi still says it is on track to become the third-largest grocery retailer by store count by the end of 2022.

Last month notched another big environmental milestone in its efforts toward becoming a more sustainable retailer.

The grocer completed installation of its first company wind turbine at its warehouse in Dwight, Illinois. After breaking ground last summer, the wind turbine was recently activated and will power up to 40% of the warehouse’s total energy needs, reducing the amount of grey electricity consumed from the grid and replacing it with green electricity.

The wind turbine will serve as a clean fuel source that naturally limits air pollution and greenhouse gas emissions. The turbine is an expansion of the Aldi renewable energy portfolio, building on the company’s other recent milestones as recognized by the Environmental Protection Agency (EPA) — all of which reinforce the company’s commitment to becoming a more sustainable retailer.

Last year, Aldi received the 2020 Green Power Leadership Award; in 2019, it received a GreenChill Store Certification, as well as a Re-Certification Excellence Award for select stores, from the EPA.

Aldi ranks No. 16 on EPA's National Top 100 list of participating companies, No. 3 on the Top 30 Retail list and No. 15 on the Top 30 On-site rewewables list. Each list highlights EPA Green Power Partners using the most renewable electricity annually as of July 2020.

As part of a $5 billion capital investment in new and remodeled stores across the U.S., Aldi is increasing its renewable energy building elements, including preference for energy-saving LED lighting, energy-efficient refrigerated systems and rooftop solar systems on 12 warehouses and 108 stores — and counting.

With more than 2,000 stores across 37 states, Aldi U.S. is No. 26 on The PG 100, Progressive Grocer’s 2020 list of the top food retailers in North America. The retailer is on track to become the third-largest grocery retailer by store count by the end of 2022.