Despite the buzz surrounding Amazon’s acquisition of Whole Foods, there are even larger changes in store for the world of grocery: German retailers Aldi and Lidl are now staking their claim in the United States. Some will know Aldi in its current low-cost U.S. incarnation, operated by Aldi Süd, or for Trader Joe’s, operated by sister division Aldi Nord, which has won customers through its quirky branding and high quality, affordable products.

While the U.S. grocery sector is already quite saturated, the industry has largely been dominated by indistinguishable middle-tier supermarkets, who carry mostly identical brand-name items. Unlike other retail industries (clothing, for example), the U.S. hasn’t seen discounters begin to take market share just yet, and this is definitely of interest to Aldi and Lidl. The former plans to remodel its existing 1,700 stores and build an additional 1,300 in the next five years. Lidl is following suit by opening 100 stores in the coming year.

So why are Aldi and Lidl poised to win the grocery war? What about these two German discounters’ strategies and the changing customer landscape will set them up for success in the long run against industry titans like Amazon and Walmart? And more importantly, what can we learn from the broader changes occurring in the sector? Here's what we at Vivaldi think.

The price of an average basket at Aldi and Lidl is 5.25 percent and 9.1 percent lower than at Walmart, respectively, yet both brands offer a range of organic, gluten free and other high-quality options. While mid-tier grocers have traditionally catered to the middle class, the quality promised by Aldi and Lidl, along with the price savings they can offer, serve all customers better than the established US grocers currently can. In the UK, 31 percent of Aldi and Lidl shoppers are from upper or middle income, and this demographic in the US may also choose to do their shopping with the new German discounters.

2. The Perceived Value of Brand-Name Products is Diminishing

Consumers are spending less each year on branded possessions in order to maximize their available income on experiences, and retailers are taking note: by going generic and thereby avoiding the “brand tax,” they can pass those savings onto consumers.

So, what does this mean for shoppers at Aldi and Lidl? Aldi and Lidl’s models rely heavily on selling private label goods, purchased through third-party suppliers at quantity discounted levels and repackaged under house brands. As the value of branded goods diminishes, generic brands and the discounters that sell them thrive. If Aldi and Lidl can effectively communicate their price advantage over Walmart while maintaining the high-quality people expect from places like Amazon, they stand to win a much larger share of American customers. 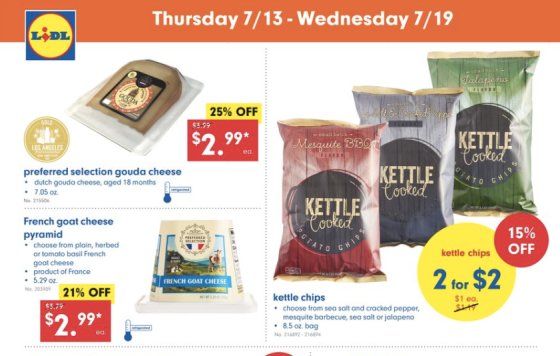 A selection of Lidl's private-label products in a circular

It’s no secret that much of Trader Joe’s success can be attributed to its private brands: More than 80 percent of what’s carried in its stores are private label, compared to under 20 percent for other supermarkets.

As the rivalry heats up, Aldi and Lidl will continue to improve their ever-expanding array of house brands in order to derive all the network effects of being the sole provider of each individual product. As evidenced by the success of Canada’s Pirate Joe’s, having high-quality private label products is a major pull.

In the U.S., the discounters may have an uphill battle to fight with regard to public perception of house brands, but that hasn’t impeded Aldi or Lidl’s success launching products in Europe, where Aldi’s highly awarded $8 Rosé was rated among the very best in the world.

4. Lessons from Successful Launches in the UK

Both chains have seen their market share grow at breakneck speed in the UK, more than doubling the growth rate of their nearest competitors and quickly usurping established British supermarket players.

Sainsbury, Tesco, Asda and other UK grocers have all seen markedly declined growth since Aldi and Lidl have stepped into their home turf. Lidl, in particular, has shown great flexibility in altering its business model to fit regional tastes, and will be offering more than double the SKUs in the U.S. that it offers in its European locations.

Cost is still king in the grocery sector, and Aldi and Lidl’s offering of high-quality products at rock bottom prices will serve Americans as well as it has Brits. While Walmart will likely adapt to defend against the new threat it faces from the German discounters, the rest of the sector will have to follow suit or face extinction.

The past few years have seen massive changes in the retail sector, with 2017 bringing even more store closures than at the height of the 2008 recession. This can partly be explained by the rise of online shopping, which is growing rapidly (at a rate of 30 percent for grocery).

While this year alone may see upwards of 8,600 retail store closures in the U.S., discounters are prospering. By offering the type of perks Aldi or Lidl can through samples and special discounts (e.g., Lidl’s “surprises” campaign), the German chains can maintain their relevance amidst changing times.

While the German discounters will need to be cognizant of the dangers of overbuilding as they expand along the East Coast and across the U.S., they will have internalized the lessons from the demise of Sears as much as they have Tesco’s Fresh & Easy.

While much of recent attention remains on Amazon, don’t count Aldi and Lidl out: interesting things are sure to come. As U.S. consumers begin to realize the benefits of shopping at both German discounters, the established players will need to adapt their strategies to compete. As the price war between major supermarkets heats up, consumers will surely win.