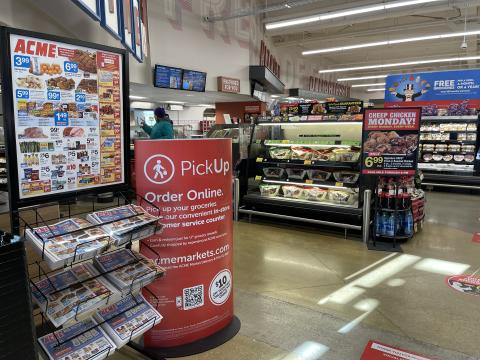 Acme Markets, with more than 160 stores in the Northeast, is part of the Albertsons Cos. family of banners.

The Albertsons Cos. reported its fourth consecutive quarter of digital growth over 200% on April 26, as online shoppers flocked to the company's grocery delivery solutions, curbside pickup capabilities and innovative apps.

For the fourth quarter ended Feb. 27, digital sales at Albertsons skyrocketed 282% as the company experienced a rapid acceleration in online transactions amid the pandemic. To keep driving online traffic, the company has been investing in boosting its digital capabilities even further.

In March, Albertsons announced it formed a partnership with Google to make omnichannel shopping even easier and more convenient for millions of customers across the country, merging the grocer’s broad reach and retail know-how with the tech company’s capacity for customer-centric disruptive innovation.

After collaborating behind the scenes for the past year, the two companies are now introducing several new enhancements that aim to make the shopping experience easier and more exciting. Among the partnership’s planned innovations are shoppable maps with dynamic hyperlocal features, artificial intelligence (AI)-powered conversational commerce, and predictive grocery list building via Google Cloud.

The partnership’s rollouts will build on projects already implemented to improve the customer experience. Albertsons and Google are now making it even easier for customers to pick up groceries or have them delivered by providing pertinent information about online ordering from many Albertsons stores directly within mobile search — a functionality coming to Google Maps later this year.

During the fourth quarter, same-store sales at Albertsons grew 11.8% aided by the big jump in digital comps.

The company forecasted that same-store sales would fall between 6% and 7.5% in 2021, but increase on a two-year stacked basis.

"We are very proud of what our team accomplished in fiscal 2020, serving our customers and communities throughout the COVID-19 pandemic," said Vivek Sankaran, president and CEO. "As a result of our strong execution, we delivered record full-year results, drove meaningful market share gains and are well positioned for continued success and strong performance in fiscal 2021. We have made substantial progress against our strategic priorities, and are still in the early innings of our transformation journey. Looking ahead, we remain committed to further strengthening our relationships with our customers, offering a superior shopping experience and generating value for all stakeholders."

Sales and other revenue was $15.8 billion during fourth quarter compared to $15.4 billion in the prior year. The increase in sales was primarily driven by the company's 11.8% increase in comps, partially offset by the impact of the 53rd week in the fourth quarter of fiscal 2019 and lower fuel sales.

Gross profit margin increased to 28.9% during the fourth quarter compared to 28.6% during the fourth quarter of fiscal 2019. Excluding fuel, gross profit margin increased 10 basis points. The increase was primarily attributable to improvements in shrink expense and continued sales leverage, partially offset by growth in digital sales and strategic investments in price.

For fiscal 2020, sales and other revenue was $69.7 billion compared to $62.5 billion during fiscal 2019. The increase in sales was primarily driven by the company's 16.9% increase in comps, partially offset by lower fuel sales and the extra week in the fourth quarter of fiscal 2019. Same-store sales also benefited from the company’s 258% growth in digital sales.

During fiscal 2020 the company spent $1.63 billion in capital expenditures, which included accelerated investment in digital and productivity initiatives, and the completion of 409 store remodels.