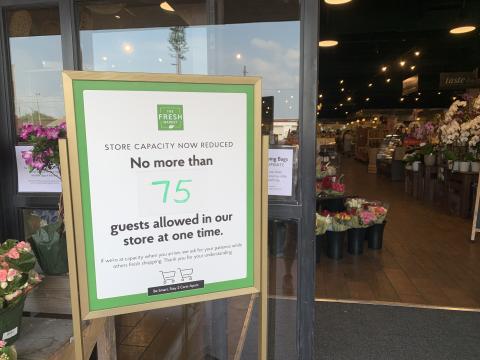 Last year, The Fresh Market was one of the first grocery retailers to mandate masks in-store.

After a few months of quasi-normalcy, the American consumer is back in a panic over COVID-19.

A fresh Gallup Poll is showing a dramatic shift in optimism about the pandemic from just a month ago: More Americans now say the coronavirus situation in the United States is getting worse (45%) rather than better (40%). In June, a record 89% said the situation was getting better, while only 3% said it was getting worse.

In addition, more Americans (41%) now than in June (35%) say the better advice for healthy people is to stay home as much as possible to avoid spreading the virus, as opposed to living their lives as they normally would. The June reading represented the low point in calls to stay home. Before April, consistent majorities held that view.

The current survey marks the first time since January that more U.S. adults have been pessimistic than optimistic about the COVID-19 situation. There was greater pessimism than optimism for most of 2020. At its worst, 73% in November said the situation was deteriorating amid a dramatic surge in cases last fall.

Gallup's latest update on coronavirus attitudes comes from a July 19-26 web survey of U.S. adults who are members of Gallup's probability-based panel. The survey was conducted amid a new spike in COVID-19 cases in the United States as the more contagious Delta variant of the virus spreads through the country but before the Centers for Disease Control and Prevention revised its guidance on the wearing of face masks in public.

Americans now expect societal disruptions related to COVID-19 to persist at least through the end of the year, or longer. Whereas in June, nearly half of Americans expected COVID-related disruptions in society to last only a few more weeks or months, now just 17% believe they will end by then.

Instead, 41% expect the COVID-19 disruptions to persist through the end of the year, and 42% — up from 17% in June — believe they will stretch into 2022. Even when Americans were much more optimistic about the coronavirus situation in June, relatively few, 29%, believed the pandemic was over. But that already low number has declined this month, to 21%.

As coronavirus infections increase, Americans' concern about getting COVID-19 has grown, though it remains well below where it was before vaccines were widely available. Currently, 29% say they are very or somewhat worried about getting the virus, up from 17% in June and back to the level seen in April, when 30% were worried.

Nineteen percent of Americans say they are completely or mostly isolating themselves from people outside their household, essentially unchanged from 18% in June, which represented the low point in Gallup's trend. There has also been no meaningful change since last month in the percentage of U.S. adults who say they are avoiding public places such as stores or restaurants (28%), small gatherings (20%), large crowds (40%), or traveling by plane, bus or train (37%).

Proportions similar to last month's say they have visited various public places in the past 24 hours, including their workplace, grocery and other stores, restaurants, or someone else's home.

Forty-six percent of U.S. adults say their life is being disrupted a "great deal" or "fair amount" by the coronavirus, compared with 47% in June.

One area in which behavior has changed is wearing face masks when out in public. However, the change is in the opposite direction of what might be expected amid growing concern about the coronavirus. Sixty percent of Americans, down from 68% in June and 79% in May, report they wore a face mask in public in the past week. The decline may reflect relaxing of face-mask requirements at many public places, though some local areas are now reinstating those mandates.

See the rest of the Gallup data here.