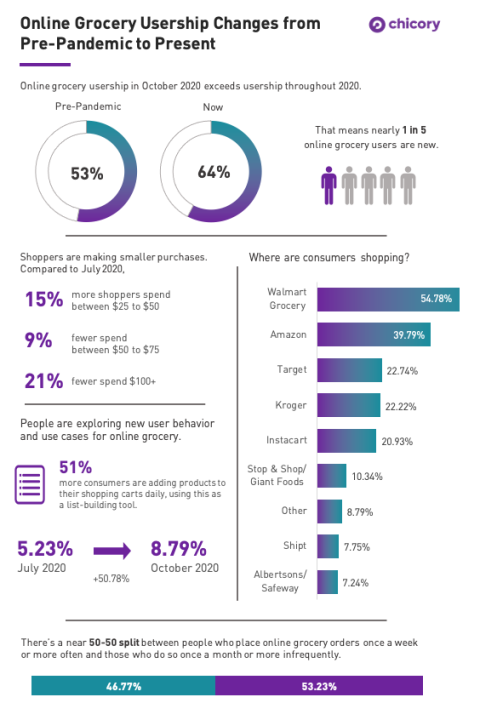 Chicory's infographic illustrates online grocery usership changes from before the pandemic to the present.

A new grocery consumer research study finds there are 18% more online grocery
users now compared with pre-COVID times. The survey of 615 American shoppers was released today by New York-based digital shopper marketing platform Chicory and has a margin of error of plus/minus 5.249%.

The results of Chicory's fourth quarterly consumer survey quantify the impact of COVID-19 on online grocery usage by comparing current results with past quarterly studies throughout 2020. The latest survey, conducted in early October, found that Walmart (55%) and Amazon (40%) are front-runners in the online grocery wars, but other retailers are gaining ground.

While Walmart and Amazon lost 12% and 30%, respectively, of online grocery
market share from January to April, Amazon regained 18% more share at an even higher level than all other quarters in the latest period. Although Bentonville, Arkansas-based Walmart lost a little over 1% of share compared with January, the retailer still commands the majority of the online grocery market, according to Chicory, with 55% consumers reporting that they use this retailer for their online grocery shopping. While Seattle-based Amazon gained share, this was at Walmart’s expense and not at the expense of other retailers, as more consumers reported using smaller retailers at higher levels, the survey found.

From pre-COVID-19 to present, here's how much market share shifted for each retailer in
Chicory's survey:

From July to the present, here's how much market share shifted for each retailer:

The leading retailers that consumers wrote in the “Other” section were H-E-B, BJ’s and Costco.

“Interestingly, Shipt, Stop& Shop, and Giant Foods had the largest increases in market share compared to other retailers from pre-COVID-19 to present,” said Yuni Sameshima, Chicory’s CEO and co-founder. “This may be because while all other retailers were well underway with e-commerce development, Stop & Shop, Giant Foods, and Shipt were still ramping up e-commerce awareness and development. And when consumers were confronted with limited retailer availability for purchasing groceries online, they turned to alternative choices that they hadn’t considered before. Now, Stop & Shop and Giant Foods operate their own e-commerce banners, having eliminated Peapod, and Shipt is reportedly adding 100,000 new holiday workers this year.”

Although many restaurants have reopened, survey results indicate that 64% of
consumers are ordering groceries online and still cooking from home. In fact, online grocery usage in October exceeds levels from all other quarters.

The survey also suggests that a growing number of consumers are treating online grocery services as their regular weekly brick-and-mortar shops, building their carts with a full week's worth of groceries at a time. In each quarterly survey, the majority of respondents add groceries to their online carts weekly or more often. In October, this amounts to 56.85%, with the rest (43.15%) adding to their carts every few weeks.

Survey results found a near-even split between consumers who place an online grocery order once a week or more often (46.77%), and those who do so once a month or more infrequently (53.23%). This is a shift from January, which had a 41.74% (weekly or
more often) and 58.26% (monthly or more infrequently) split, but in line with April and
July.

Bentonville, Arkansas-based Walmart operates more than 11,300 stores under 58 banners in 27 countries, and e-commerce websites, employing 2.2 million-plus associates worldwide. Walmart U.S. is No. 1 on The PG 100, Progressive Grocer's list of the top food and consumables retailers in North America, while Walmart-owned Sam's Club ranks No. 9 on the list. Online retailer Amazon is No. 2 in PG's ranking, while its Austin, Texas-based subsidiary Whole Foods Market is No. 24.