UNFI has named Dick’s Fresh Market, a family-owned and -operated grocer with five stores in western Wisconsin and southern Minnesota, the 2019 Grand Master Marketer for overall consistent performance at the 23rd annual Master Marketer competition, where it presented Dick’s with a $25,000 grant for the charity of the independent retailer’s choice. The awards, which recognize best-in-class marketing efforts by independent grocers served by UNFI’s wholesale distribution business, were also given out to 30 category winners at its sixth annual National Expo.

“Independent grocers continue to display innovation in connecting with their customers by creating and implementing powerful and effective marketing and merchandising programs around the country,” noted Brian Audette, SVP, merchandising and category management of Providence, R.I.-based UNFI. “The grocery industry remains as competitive as ever, and the Master Marketer Awards identify grocers who excel at building lasting relationships that keep consumers loyal to their brands. Congratulations to all of the participants and winners.”

More than 475 marketing programs were in competition for the awards, which are bestowed based on the creativity, clarity and effectiveness of the stores’ marketing efforts. Entries were judged by professors and graduate students from the California Polytechnic State University, in San Luis Obispo, Calif., and Virginia Tech’s PRISM, a student-run advertising agency in Blacksburg, Va.

Using a mobile app developed especially for the National Expo, attendees took part in a live poll for the Master Marketer People’s Choice Award. In this category, eight nominees in the TV commercial category were given another chance at being recognized for their TV spots. With 25 percent of the vote, De Pere, Wis.-based Skogen’s Festival Foods won the People’s Choice Award.

The store winners by category are as follows:

UNFI is a food wholesaler delivering a wide variety of products to customer locations throughout North America, including natural product superstores, independent retailers, conventional supermarket chains, ecommerce retailers and foodservice customers. Combined with Eden Prairie, Minn.-based Supervalu, which it acquired in 2018, UNFI is the largest publicly traded grocery distributor in the United States, and No. 30 on Progressive Grocer’s 2019 Super 50 list of the country’s top grocers. 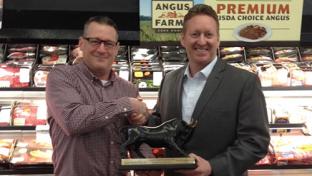