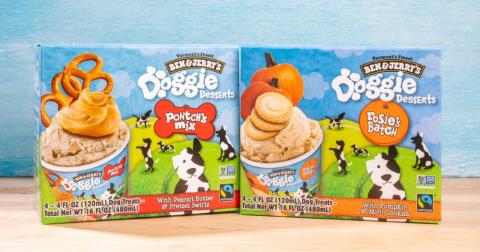 All of the high-quality ingredients used in Doggie Desserts can be found in current Ben & Jerry's ice cream recipes.

Ben & Jerry's customers picking up a pint of their favorite frozen treat can now also grab one for their canines, as two new flavors designed exclusively for dogs are being unveiled for the first time in the ice cream company's history.

Doggie Desserts by Ben & Jerry's are frozen treats specifically formulated for dogs, with a sunflower butter base. The Pontch's Mix flavor contains peanut butter and pretzel swirls, while Rosie's Batch features pumpkin and mini cookies. All  of the high-quality ingredients used in the premium desserts can be found in current Ben & Jerry's ice cream recipes.

"We know our fans love their dogs and treat them like family," said Lindsay Bumps, a Ben & Jerry's global marketing specialist who also happens to be a certified veterinary technician. "We created this product line so pups can enjoy something even better than belly rubs. Doggie Desserts are the sweetest treat they'll ever put their paws on."

There’s no doubt that pets are getting extra love during the COVD-19 pandemic. As more Americans work from home, they have extra time to enjoy — and pamper — their pets.

According to Progressive Grocer’s 2020 Consumer Expenditures Report, pet food is up by a couple of percentage points, while treats and supplies both grew significantly through July 2020.The Stamford, Connecticut-based American Pet Products Association estimated that the pet food and treat category in the United States reached $38.4 billion in 2020.

In addition to the two new Doggie Desserts, Ben & Jerry's has partnered with suppliers to offer pet accessories like a 6-feet custom tie-dye leash made from recycled water bottles, and a plush cone toy stuffed with recycled fill.

The new Pontch's Mix and Rosie's Batch dessert flavors were named after two real canines in the Ben & Jerry's dog-friendly office — a Frenchie and a rescue mutt of mixed heritage, respectively. The Ben & Jerry's headquarters in South Burlington, Vermont, often has up to 40 pups curled up under desks as part of the K9-to-5-er crew to keep employees company.

Doggie Desserts will be sold individually in 4-ounce mini cups or 4-count multipacks at supermarkets, mass retailers and select pet stores nationwide. The suggested retail price per multipack is $4.99.

Dessert for pets is Ben & Jerry's latest strategy to innovate in the frozen category. Last year, it took the term “Netflix and Chill” literally with the launch of its Netflix and Chilll’d ice cream. The company teamed up with Los Gatos, California-based Netflix on the new flavor, which contains peanut butter ice cream with “sweet and salty pretzel swirls” and fudge brownie pieces, to offer consumers fun snack options while binge-watching content at home.

Ben & Jerry's products are distributed in 35 countries in supermarkets, grocery stores, convenience stores, franchise Ben & Jerry's Scoop Shops, restaurants, and other venues. The company, a wholly owned subsidiary of Unilever, became a Certified B Corporation in 2012.