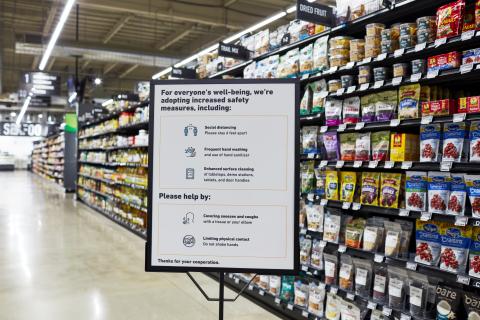 Pandemic signing at the Amazon Fresh in Woodland Hills, California.

Amazon is working on its second proposed location in the Northeast, this time in Plainview, New York.

According to Newsday and building permit documents, the Amazon Fresh slated for Plainview, a town on Long Island that is about 33 miles from Manhattan, would occupy 33,342 square feet, or 60%, of the 55,162-square-foot space in Manetto Hill Plaza that a Fairway Market vacated in July.

Amazon declined to provide information about its Long Island plans, telling Newsday on Monday that it "doesn’t comment on rumors or speculation."

Amazon announced in November that it would be opening an Amazon Fresh store in a shuttered Fairway Market in Woodland Park, New Jersey. An official opening date has not yet been announced.

Seattle-based Amazon is No. 2 on Progressive Grocer’s 2020 PG 100 list of the top grocers in the United States, while Austin, Texas-based Whole Foods is No. 24.